A lot.  In October.  And some people like snow, but not me.  I so want to move.  But if it has to snow this was the way to do it.  It snowed on Saturday, when there was not much going on.  Nothing we could not get out of.  I still can't believe it snowed.  We have had Halloweens in shorts and bundled up so it really should not surprise me.  I kept hearing the weather reports and assumed they were wrong.  But not wrong enough to tarp up some of the big wheels in the back yard, pick up the toys, move all kinds of stuff and grills into the shed, and bring in 3 bags of pellets.  I loaded up the car with extra clothes 2 pairs of gloves, shovel and brush.  I called my parents who were vacationing in the Poconos and said I think you need to come home.  The weather man is calling for a lot of snow, they have all ready called snow emergency in many of the boroughs, they canceled all school events in all the counties.  You might get stuck if you can't get home.  I felt bad saying end your vacation but they would FREAK out if I even walked in a storm like we got let alone traveled the east coast states in it so  why should they drive in it.  I would worry too.  And they came back home.  They left late in the evening and did not get home till midnight but they beat the storm that then we were thinking we might only get.  And we got it, they 2 states away got it to.  But we all got it safe in our homes.

It was a long day.  However it was a nice day of cuddling up with the kids, nothing to do and nowhere to go, like I said at the beginning if it had to snow this day was great for it.  It started coming down light, like a little dusting.

It covered my dead mum that I would not through away yet because I figured how perfect for Halloween.  I draped it in skeletons and wha-la a spooky Halloween decoration, now covered in snow, the dusting.  By the time it was done the mu was pushed down and the snow reached the black line on the big pot. 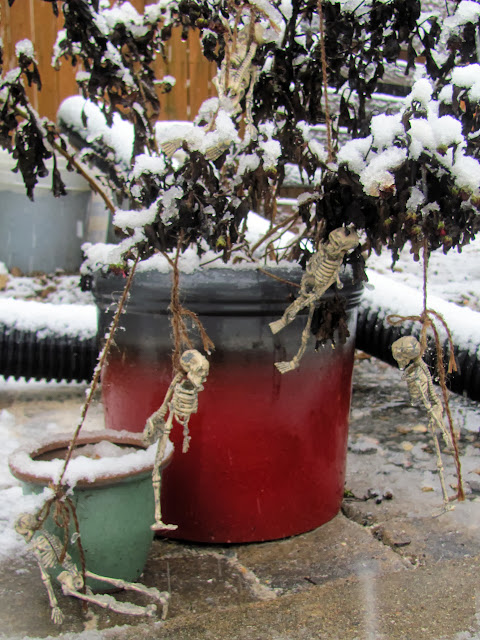 It covered non dead mums that were alive and vibrant in the yard. 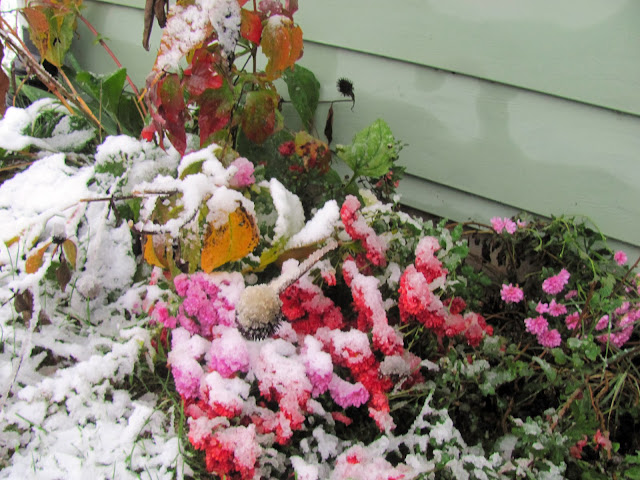 Then picked up.  It started sticking on the roads, on my uninteresting mailbox. 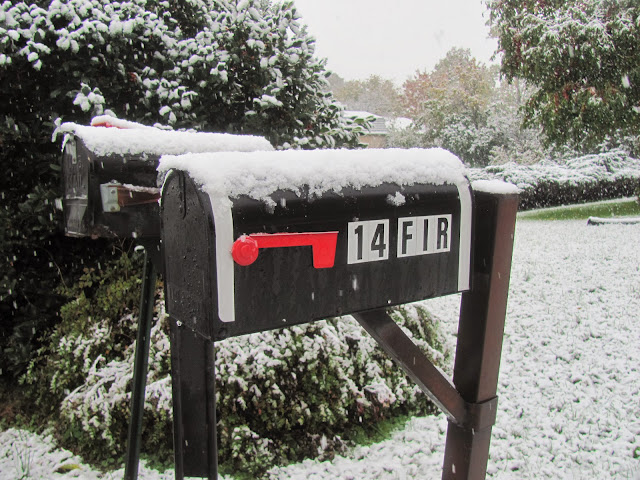 Sadly it took down our "family" tree, Evan named it.  But I do like it, well like what a strong healthy one looks like anyways.  It was never to big due to lack of pruning but no matter how big it was or should have been it got ruined now. 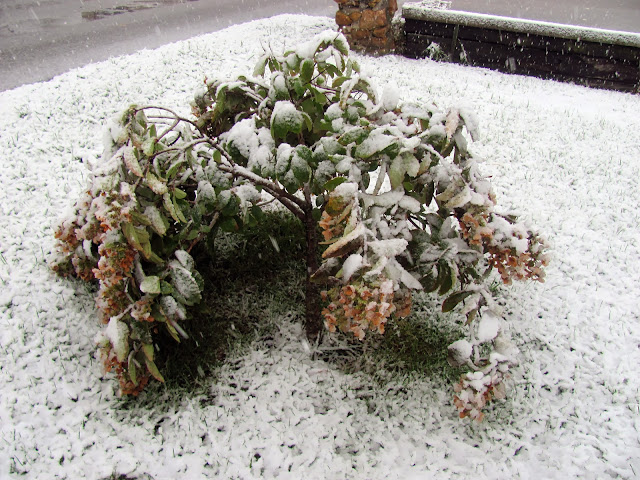 The heavy wet snow pulled  it down to the ground, looks like a tree.  I will try to save it.

On the flip side the rose of Sharon bushes that were just the other day taller than the fence, again due to lack of pruning, now too look like bushes.  They are also broke but I believe can most likely come back. 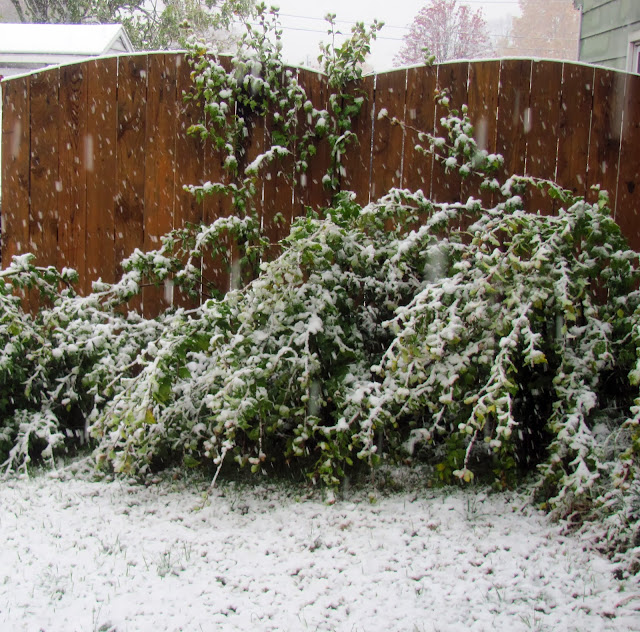 The kids were begging to play outside.  I was hesitant but I gave in. 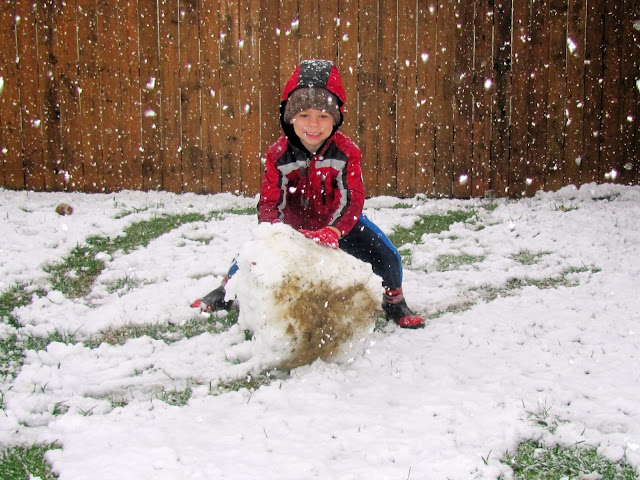 Into a fort that Gregory was building and Smiley was kicking. 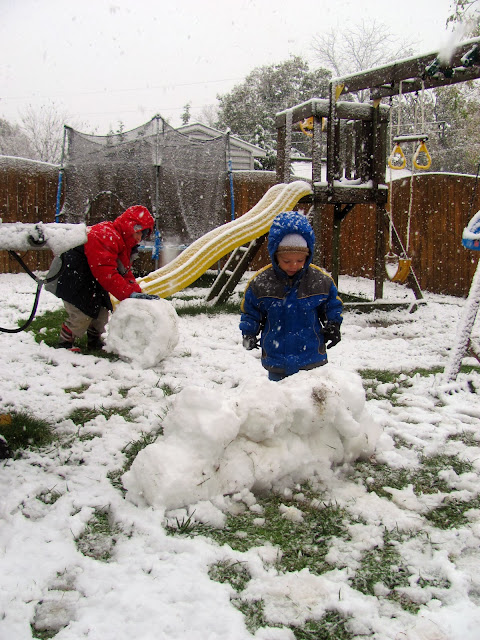 Catching snowflakes is so much fun. 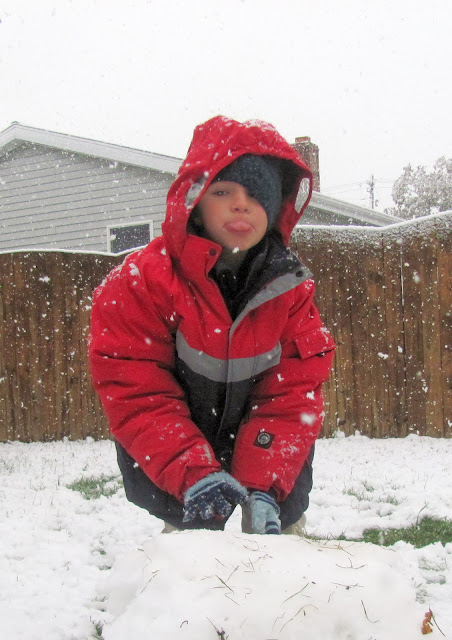 They came back in quickly.  Why I was hesitant.  They were dripping wet.  This snow was a HEAVY WET snow.  They were soaked in minutes.  Not like they walked in the rain like I pulled them out of the washing machine before the spin cycle, soaked.

I am glad they came in because it picked up.  It kept coming down faster and harder.  Wet and heavy.  The snow was so thick. 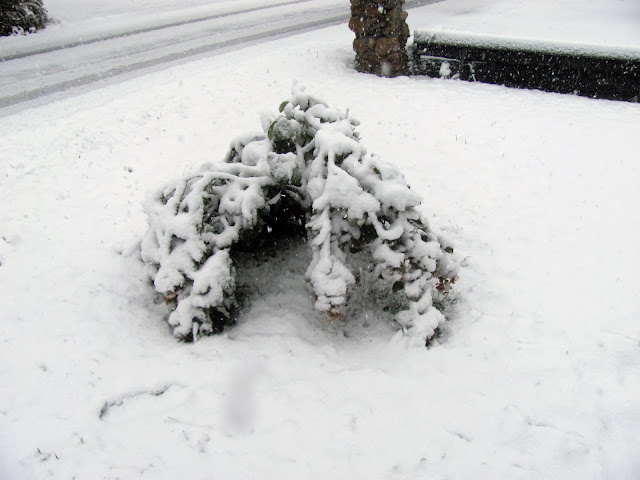 It laid so quick and kept coming down.  Soon our Halloween was a winter wonderland.  It was beautiful. 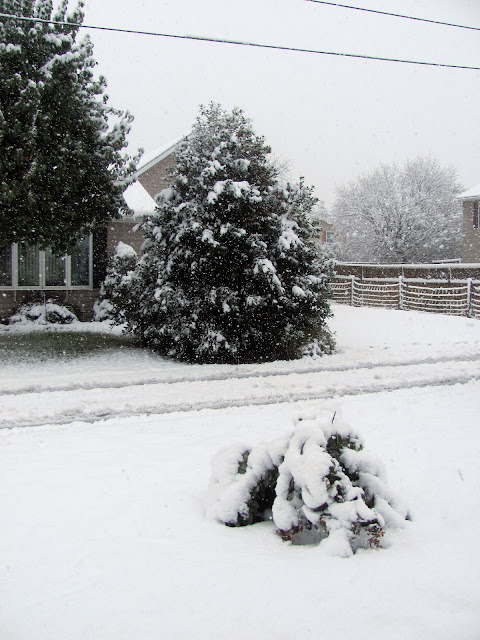 The heavy snow caused so much damage.  It snapped trees, broke power lines, a lot of havoc.  We had power for the most part.  It was flickering on an off all day.  In the light of the day the kids made jokes about it as the day turned to night the were scared.  Every time it went out they cried.  But since it was Halloween we had all kinds of spooky candle lights around, perfect huh?  We had glow stick that they wore around there neck.  They were happier.  My parents had no power for more than 14 hours, a street up no power for more than 10, I was SO fortunate for what we had.  And as far as my parents are concerned they have a generator and it is more than sufficant.  We would have headed down there if we could have traveled the roads.

But we stayed in and we were warm and well fed, I along with half of the east coast went shopping Friday. We watched in awe.  It just kept coming deeper and deeper.  I never took Faith out in it.  I did not even let her touch it.  I regret that but on the other hand it is so cold she would have very much not enjoyed it.  She will have more chance this year.   But she liked watching it. 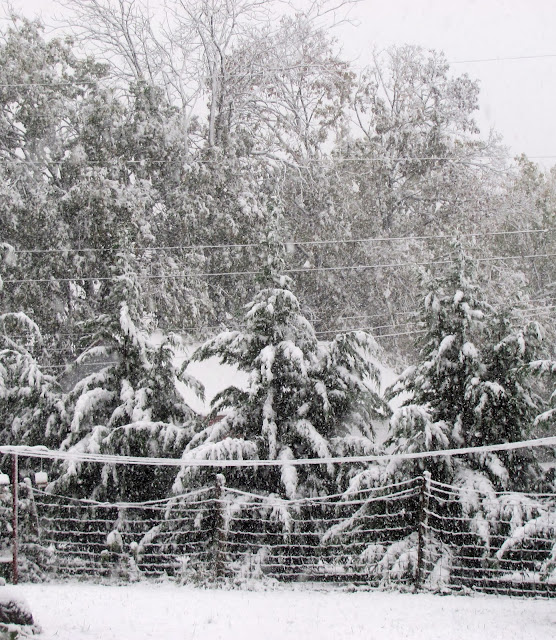 I liked watching it too but I got worried about the weight. 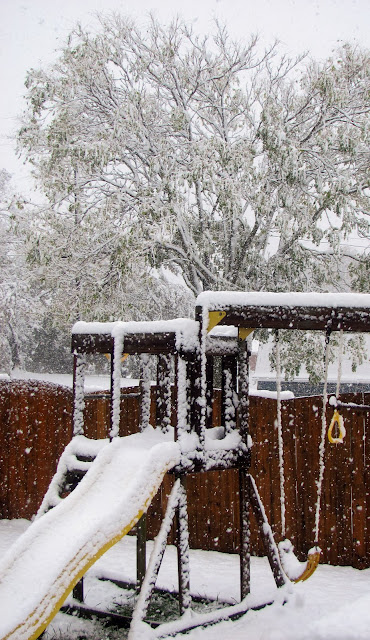 That tree behind the swingset, that big tree.  It kept getting lower and lower as the day went on.  That was the story all around the area.  Due to how early this storm came the trees have not dropped there leaves yet.  It added to the weight.  Trees could not bare it and breaking and breaking sheds, homes, blocking roadways.  I watched this one out my kitchen window all day.  As worried as I was it stood together.

We went out today, we headed down worry some roads to church.  But they were fine, we were fine. By 3 pm today it was in the 40's and will be so tomorrow too.  So it is all melting quick.  We will move on to our normal tomorrow.  A little different but a memorable Halloween weekend none the less.

Email ThisBlogThis!Share to TwitterShare to FacebookShare to Pinterest
Labels: life as we know it, weather

WOW...that is crazy..I am sure not ready for snow. However your pictures turned out so pretty that I may have to get excited for snow :)

Wow - definitely a memorable Halloween! Glad your parents made it back all safe 'n sound and that you guys managed to stay warm (when you weren't out playing, that is!) and well fed. :)